Trotakt projekt was a multimedia triple project consisting of the sound (art-rock/synth-pop band), the vision (nuanced stage presentation including video projector) and the fashion (designed by a band member). They were not from Zagreb originally but from Metković – a small town in Southern Dalmatia. Trotakt projekt moved to Zagreb in late 1981 bringing self-recorded demo tape along and strong will to win the big city crowds. As a novelty act they did win certain Zagreb critics. In retrospect, once you ignore the vision (visual presentation more in line with so called New Romantic / New Pop looks than with rock music anyway) the musical shortcomings become more obvious. Although at their beginning they shared some common ground with the rest of the bands portrayed here, Trotakt projekt in essence really don’t represent rock aesthetic championed on this site. It’s fine to be a pop act too. 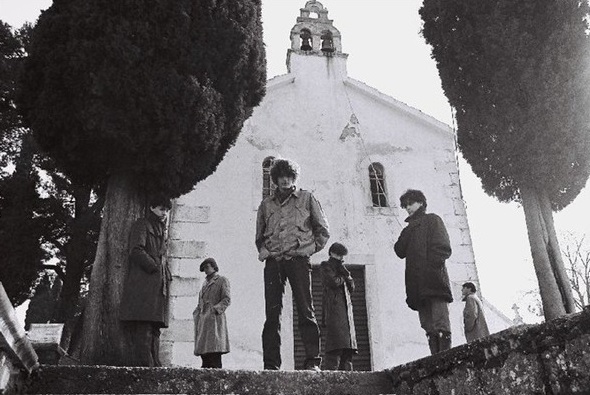 Couple of tracks from ‘legendary’ Demo ’81 carry certain dose of new trends probably born out of frustration of the restless band leader and founder Jurica Popović. Slowly resolving (and occasionally gloomy) demo song-sketches were recorded under the long-lasting influence of Bowie’s art-rock phase although contemporary new wave influences and production methods  might be more obvious on the surface. In short: art-rock/synth-pop fjaka (fiacca). Living in a godforsaken small town on the Mediterranean coast outside the summer season while the eventful life is happening somewhere else (in the decadent European capital cities!) has never been easy…

Trotakt projekt managed to record (and self-produce) what should have been the debut (“Blago tonirano”) in 1983.  As the story often went in this town, the master tapes were shelved by the Jugoton label… and finally released on CD 30 years later! “Blago tonirano” is indeed better representation of Trotakt projekt but it’s still a tedious affair. The lethargic album is mixture of new songs & old re-recorded demo songs which tumble one after another with lazy disillusioned art-rock pace on the road to nowhere or just back to square one (“Scary Monsters” or “Flesh + Blood”).